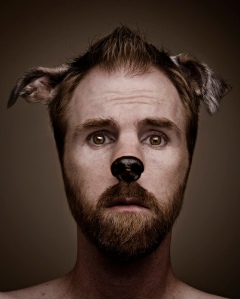 The dog was just a puppy, and it came rocketing across the street with its tail down. The dog’s owner, rummaging in his garage, the door open, yells out to dog. It’s some kind of lab mix and it jumps up on us with joy. We are mindful of the traffic on the street, and corral the pup by its collar. The owner trots over and we pass the dog back to him.

“Some kind of mix,” he said. “I got him from a shelter. They don’t euthanize here, so we went down to Riverside where they do, and rescued him.”

My wife has volunteered for years at the local Humane Society, where they struggle to find owners for their orphaned pups and kittens. Their pledge to not euthanize was designed to reassure locals of a mutual responsibility to manage their pets. Unintentionally, the Humane Society has also “rescued” their charges from death, and by doing so has removed that action from the scope of the people who come in to find a pet.

The local blood bank in Santa Barbara ran as a non-profit organization for decades, as a vital partner in local health and medical services. One day it announced that it was selling its operation to a for-profit blood services organization that would help manage the blood supply with new organizational tools and greater funding for new technologies.

Within a month, the number of  blood donors to the blood bank fell to the point where it was in danger of failing both economically and in its roll to provide for the local demand. Soon after, the blood bank resumed its operation as a non- profit organization, and the volunteers returned.

A large, federal agency funded digital library effort struggled for years to achieve greater impact. During this time, the project was run by a funded core of organizations. They had originally drawn up a community governance plan, but this had never been implemented. A cadre of volunteers, people who shared the vision of the effort, soldiered on with committees and working groups, but nothing seemed to gel. The agency provided some additional funding for new work, and the project parceled out these funds to a handful of former volunteers. Almost immediately, the remaining volunteers stopped volunteering, and the entire effort was soon defunded. One might argue that it was not the presence of money, but the lack of community that doomed the project, however, the impact of money was immediate and damaging.

The presence of money can interrupt the work of a volunteer community in unintended ways. But these do not need to be unexpected. If money is made available, it needs to be managed by the volunteers (they need to have a say in the budget), and it needs to support their voluntary efforts, not pay them for the same work.

As for the unintended (perhaps even perverse)  impact of not euthanizing stray pets; instead of, say, holding mock executions to give people the joy of rescue, there might be opportunities to advertise the burden of maintaining these pets, and the need for them to have real homes.