It’s time to support the passion of the scientist

Some months ago I wrote about how scientists as a group on the internet behaved a lot like a certain class of groups; people who had been diagnosed with fatal diseases. The point of that essay was to illustrate that scientists have needs that go well beyond simple community. And I wrote it in part because I had been involved with several projects that had announced as their mission to create online communities for scientists, to develop strategies for promoting community engagement, or to train people to do this. As “community” can be described as a container for shared cultural practices, I can reaffirm that scientists really do need such containers in the process of reflectively reinventing the cultures of science. But they also need much more than communities to support their own quests to perform their science.

In organizational management theories, “community” (such as a “community of practice”), is useful for management as a tool to improve worker engagement, and it also makes workers more willing to share their tacit knowledge, which can then be recorded as institutional memory. “Engagement” in the corporate sense describes a positive emotional alignment of the employee with her work and co-workers. Engaged workers are said to be more productive (there is evidence for this), and so programs aimed at increasing their numbers have become routine. A somewhat more aggressive form of engagement is called “stakeholder alignment” which looks to build engagement for a specific project. This engagement helps projects move through implementation without hiccups.

“Community engagement” also extends the notion of engagement to customers or service users, in the drive for brand loyalty (in this case it’s also known as “customer relationship management”). At a time when customers have simple, powerful means to compare prices and ratings, forging a durable emotional alignment between the company and its customers becomes even more valuable. The same is true in the non-profit world where a new army of “community engagement managers” now works to keep donors loyal and their wallets open.

On the upside, the best community engagement programs support an open dialogue to improve the qualities of the workplace, or the product or service. There is a give, and not just a take here. On the down-side, the effort to promote engagement can entail a (seemingly) unending amount of emails or tweets or whatever, designed to remind workers or customers of why they need to be even more engaged.

Scientists show up at work or online already fully engaged… in their own research. They don’t need the offer of a group tour rate to cruise around New Zealand on a boat, nor another term life-insurance policy. What they need is to follow their passion: the passion of the scientist, of the knowledge explorer. 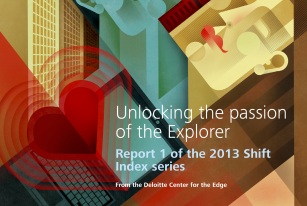 John Hagel III has recently offered research suggesting—as I will show below— that scientists are actually unavailable to be engaged; that the community engagement efforts of professional associations and academic publishers will necessarily fail, and for a good reason. Perhaps for the best reason. Hagel’s argument is supported by a long-term research project he helped lead at the Deloitte Center for the Edge. See: Shift Index. See also: Unlocking the Passion of the Explorer.

Hagel notes that engaged employees or engaged customers are those who report they are happy with/in their current job, or with the current product/service. They have achieved a static form of satisfaction. From this disposition they can be relied upon to work harder or to buy more. After decades of thousands of corporate engagement programs across the US, only about 30% of employees (in their survey) self-report as engaged. The bulk of the remainder are unhappy for a variety of reasons. However, a few who are not engaged include those who come to work or to the marketplace following their own passions. Hagel is most interested in three passionate dispositions that he claims can add a lot of value to a company in today’s emergent economy, well above the return on any engagement program. Combined, these dispositions form what he calls “the passion of the explorer.” I would extend this description to include knowledge explorers: scientists.

This form of passion has three components:

That’s a powerful combination. People with the passion of the explorer are never satisfied or happy with what they have accomplished. What excites them is the next challenge on the horizon—it’s an opportunity to achieve more of their potential and take their impact in the domain to the next level. They are constantly seeking out those challenges and connecting with anyone who can help them address the challenge.

Passionate employees (in Hagel’s sense) are predictably unhappy with the status quo. Of course, an original meaning of “passion” is “to suffer.” They are necessarily immune from becoming engaged, and, I would guess, reactive to attempts made to engage them. In a 20th Century mode, these are not ideal employees. But the Deloitte study claims that these are precisely the type of employee needed for a 21st Century corporation.

In the academy, these are the scientists and the intellectuals who are passionate about their research, who are eager to teach others, and who are resource-aggressive for any new knowledge they can acquire. Attempts to improve their “engagement” in some form of community will find them refractory in the extreme. Gamification will leave them merely irritated. Emails to them will be deleted unread. The only community these scientists will really join, and then with some hesitation are those they own and manage by themselves for their own purposes. They are happiest when they can be connected to others who share their specific objects of study, and even there, their discussions point to unknowns and pain points in the research process.

How then can these passionate scientists be encouraged to connect, to coordinate their efforts, and collaborate online? What skills and knowledge do academic societies and universities need to acquire to move beyond engagement in order to unleash the collective intelligence of these scientists?

One model for such an organization is ESIP (Earth Science Information Partners). This year, ESIP is celebrating its twentieth year of supporting Earth science data use. The model ESIP uses is simple at one level but really complicated as it unfolds, because it is led by each and all of its member organizations and active science participants. Here are some ground rules that have worked well for ESIP.

The ESIP model for nourishing the passion of the knowledge explorer.

Open and Equal Underneath

Underneath all of this activity at ESIP is a total commitment to being open: open, transparent self-governance, open research objects, open sharing of knowledge and problems. Also apparent is an appreciation for each member’s needs and contributions. Early career and late career scientists engage in active conversations that can lead to new collaborations. In my next blog, I’ll discuss how open sharing and fierce equality can support new/old cultural norms for science.