Funded research that includes a charge to engage a community (of scholars, end users, students, etc.) in doing this research, or in using its products (data, metadata, standards, etc.) is usually underfunded. There are two simple reasons for this. The first reason is that agencies typically underestimate the cost of doing community engagement through community governance. The second is that money is a very poor instrument for directly accomplishing engagement, mainly because of the perverse effects this has on volunteerism.

At the same time, efforts to support “community” are often pursued without actually building community-based governance. Project budgets may include large amounts of “participant support” for annual “community meetings” that could help build engagement. But without the governance structure that puts the community in a position to determine key aspects of the core activities, these meetings are really only very expensive alternatives to an email list. The attendees may learn something, and will forge their own interpersonal connections, but the work of building community through governance is left undone.

I was once “voted” onto the policy committee of a large agency-funded effort. The first thing we were told, after they flew us in to the annual “community” meeting, was that the committee did not make policies. Similarly, the act of voting was used without any available model of membership. There are better ways to get the community engaged.

One of the reasons that community engagement has become more visible as a goal is the realization that “network effects” can greatly amplify the impacts of a research project’s outcomes.  Indeed, Metcalfe’s Law tells us that value of a network is proportional to the square of the number of members (n2). Bringing network effects to research collaboratories can accelerate communication of ideas and knowledge sharing. A more recent study by David Reed points to an even larger effect: that of group-forming networks. Networks that allow members to self select into smaller groups (clusters) approach an exponential increase in the scale of interactions (2n), a scale that grows much faster than any power law distribution. Enabling the network to create internal, purposeful subgroups where members are highly engaged is one strategy that can really pay off for a funded research project.

The two curves in these graphs are familiar to most. The top one is the “power law” curve, which describes many distributions, notably, the expected relationship between the amount of attention/activity on an open Internet network in relation to the number of people so engaged. This is the usual “10% of the members do 90% of the work” situation. The bottom curve is the “bell curve” normal distribution, where the main mode is high-activity. What is important to notice here is that the space under the normal curve is much larger than the space under the power law curve. Much more activity is happening here, even if the number of people are the same.

The use of community-led governance to foster engagement is covered in several other posts on this site. There are some real examples of this that can be studied. The Federation of Earth Science Information Partners (ESIPfed.org) is one.  I would guess that many agency program managers can point to histories of counter examples: of projects that never created any governance capabilities, even while they spend huge amounts of budget on “community.”

The amount of real governance required to support activities also depends on what types of activities need to be supported. If communication is the goal, then a relatively weak governance system will suffice. If real collaborations (those purposeful subgroups) are to be supported, then a robust governance system may be needed. Clay Shirky examines three levels of social interaction: communication, coordination, and collaboration. Each of these levels needs its own type of governance. 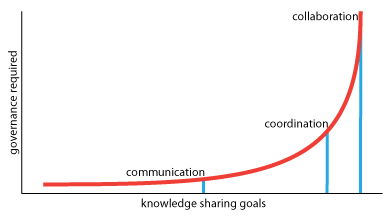 Distributing activities across an engaged volunteer network of peers can use a very limited budget to accomplish everything that needs to be done. Money is not the driving force here. It is rarely the case that agencies cannot afford to support governance through project research budgets; more to the point, they cannot afford to not support this if they want to accomplish what only a community can do.